Edward Ayers asks, “Does Digital Scholarship Have a Future?” in which he discusses the issues facing the inclusion of digital projects in scholarly work. He states that the foundation of academic life, the scholarship upon which everything else is built, has not changed. He notes that the articles and books that scholars produce today are not very different from those being produced fifty, or even a hundred years ago. To make matters worse, scholars don’t seem to care. Ayers references a study by Ithaka S+R which found that two-thirds of faculty, (sciences, social sciences, and humanities) judge that new digital methods are “not valuable or important” for their research. Many scholars believe that using digital methods would “not be worth the time.” This creates a self-perpetuating system in which new scholars continue to work in the same way as those who will be evaluating their work. Why spend all the time and effort in learning new software, tools and platforms, create a digital project, only for that same work to be deemed as having less scholarly value than work appearing in traditional print material?

Syndi Dunn’s article which appeared in The Chronicle of Higher Education has the daunting title, “Digital Humanists: If You Want Tenure, Do Double the Work.” She poses the question of what happens when scholars who build interactive databases and open-access online journals come up for tenure. She notes that traditional scholarship, in the form of a monograph or a series of individually written journal articles, aren’t a good fit for digital work. Scholarly groups and universities are working to establish alternatives for digital scholars, but Dunn notes that consensus is a long way off. This leaves digital humanists in the difficult position of believing that their digital work is worth doing, but feeling uncertain on what it will get them in their careers. Dunn notes that for those in the alternative academic careers, having a digital only portfolio is acceptable, but that those positions typically do not come with tenure. For those scholars who want to get tenure, the digital-only portfolio is risky. In order to increase their chances of getting tenure, these scholars do double the work in order to satisfy the traditional requirements of an evaluation process that hasn’t yet caught up to their digital work. This situation in turn continues to support the traditional scholarship system.

And here is how the model turned out:


It is a vast improvement over my first attempt, but still not what I was hoping for. I decided to try again, this time with an ornament. While it was hanging on the tree, I thought the height of the object would be helpful in taking the necessary photos.

Here is the model I created:


At least I am getting a model of some kind. I decided to make one final attempt, which was a sculpture I had made in undergrad. Here is a close-photo of the object: 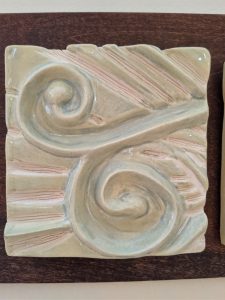 Here is the resulting model:


What I liked about this model is that I at least managed to get some of the texture on the object. It is clear that my photographic skills need improving, at least in terms of keeping the camera in the same spot (height) while moving around the object. I know that I took enough pictures, so I don’t think the issue was in the overlap. However, even though I was not entirely successful with my 3 D models, I would love to improve and be successful in using this software.

This semester I have learned a great deal about digital art history and the digital humanities. I now know the difference between a digital project and a digitized project. I can also pinpoint the inherent difficulties in the acceptance of digital art history in the field at large. I have learned about different software programs and digital tools, and know the pros and cons of each. I also have gained an understanding and appreciation of everything that goes into a digital humanities project, and that makes me a good future colleague. On a personal note, I have learned how warm and welcoming the other graduate students and faculty are at UNC, and am so happy to have found a scholarly home there. Happy Holidays everyone and have a restful break!